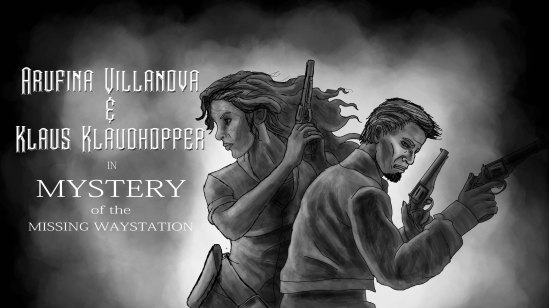 The following is a little excerpt from my Camp NaNoWrimo project. I don’t usually write in first person, so it’s been a bit of a departure for me. I’m also writing a character who is not telling his story in his native language, just to make things more challenging.

My name is Klaus. I get air sick really easily. It is not something I am proud of, but it is what it is, so there. Take it or leave.

So it was I came to be on a ship bound for the colonies, puking my guts out. We had just hit rough turbulence. I single handedly covered the deck. Crew even gave me crude nickname. I won’t relate. Better left forgotten.

Over course of journey, we docked at Waystation. A Waystation is much more stable than airship. More important, calls for better maintenance. People care when a Waystation is messed up. Waystations serve everyone, in one way or another.

Four Waystations travel in big square, over area in middle of the Barricade Ocean. Basically, giant floating townships. Ships dock with them for resupply and rest. The ship stops, but the Waystation keeps moving. Travellers make progress while resting. Very convenient.

Also convenient is self governance. No one cares who you are and what you come for, as long as you don’t put Waystation in danger or disrupt business, you do what you want. Criminals from all over come to Waystations to meet. Some set up shop permanently. Each Waystation has its own culture, different from rest. Like floating city. Fun to visit, if not shot.

We come to Echo station, at south eastern angle of square, just before it leaves port. Fortunate. Only four waystations. If not at port, want to get on just before or just after port. No good coming across Waystation three thirds of the way through route. Might as well keep going, if you can. Save 500 scrip docking fee.

My ship split fee evenly between us. Don’t have fee, get tossed before docking. I didn’t have fee when I left, but I work on ship. Swab decks, stoke boilers, paint railings. Earn fee, and more. Left ship when we docked. Waystation where I want to be for the moment.

All kinds of work on Waystation. Freelance. Bounty hunting. Body guarding. Privateering. Land of opportunity. Fill pockets until I get bored, then go to colonies, do same thing there.

First things first, though. When setting up business, you need a location. Highly visible, easy to get to. Good atmosphere, conducive to getting people to say agree to your terms. No place better for such things on a Waystation than a saloon. When traveling, everyone winds up in saloon. That’s where you hear stories about places you can’t get to, where you go to pass time, and where you go to tie one off at end of day. Also where you go to find someone of ill repute.

One can’t just sit around, waiting to be hired. Have to make name, prove worth, eat in meantime. Waystation had one bar. Bar had one bouncer. I ask for job. They tell me, beat bouncer, take his job. So I shot him in the foot and pulled him by the ear from bar. I go back in, they say get to work.

Work was easy. Word travels fast about new bouncer, likes to shoot people. No one acts up very much, those that do lose toes. I make good bouncer by not acting like bouncer. Act like patron. Just one of boys. People like me. People respect me. People send me jobs. Run escort for travelling dignitary. Settle dispute between rival factions in gang. Help raid incoming supply ship, get paid, make more money by retrieving said supplies and returning them. No one knows any better.

Lived for six months on Waystation. Lots of interesting jobs. Lots of good stories. None so good as the last chapter of that life. Also first chapter in next.

Was sitting at bar, drinking stout and enjoying the smell of barbeque whale. Crazy, the way they catch food. They dump bloody leftovers, wait for fish to swarm, drop net, and haul whole load up at once. Feeds entire Waystation for a month. Have fish jerky for a year.

Anyway, I was sitting at bar when this strange traveler comes in. Tall, about six foot. Well, taller than me, anyway. Lean build, wearing a duster coat, a trail hat, and a scarf wrapped around face. Everyone turns to look. Traveler steps up to the bar. I see a gun, under the coat. Six gun. Very rare, very difficult to find. I should know…my own six guns cost me a great deal. Traveler orders stout. Voice muffled by red scarf. Could be woman with low voice. Could be young man with high voice. Not sure until hooligans step up behind Traveler.

“Looks like we got ourselves a trail blazer, boys,” one says. “Judging by the look of your coat, though, you ain’t actually done no trail blazing. Not yet. You think you hard, but you ain’t. Not yet. Takes time. Lessons learned. Here’s first less…”

As moron number one makes his speech, Traveler reaches into coat and pulls the gun. Blows a hole right through moron’s left ear.

“First lesson is brevity,” Traveler says. “Best to say what you mean and say it quick, or people get bored.”

“How’s this for quick!” Another moron says. He lifts bottle, but it’s too late. Traveler already turned towards him and fired. The bottle shatters in moron’s hand. Blood paints the wall next to him.

“Second lesson is act, don’t talk,” Traveler says. “Related to the first lesson. Often confused by those who can’t appreciate the subtle differences.”

“Third rule is make every shot count. Especially when you go up against someone with a revolver and an inch thick steel bullet stopper, and all you got is muzzle loader.”

“All that, and I still have one round left. Are you a lefty or a righty?”

“That should teach you a lesson, but keep you working. Next time I won’t be so kind.”

Other morons look at each other. “She ain’t got no more rounds.”

“No way she’s got two guns. Too expensive.”

“You really want to find out? Besides, Klaus there got two guns, and he’s not exactly rich.”

The Traveler turns towards me. Schveisse I think. I keep hands on bar, act like nothing is happening. I’m not part of this. Just window dressing.

“You got a point,” says moron. “Pick these idiots up and lets go.”

Morons clear out. Traveler walks over, sits down.

“You must be Klaus. Nice guns. Cartographer guns?”

I shrug. “May be. Not mine originally. Came by them along the way.”

“Perhaps.” Traveler takes off the hat. A ball of raven black hair spills out over shoulders and back. Highlights actually shine blue. I thought that only happened in funny pages.

Bartender puts stout in front of Traveler. She thanks him, pulls down scarf, and takes a sip.

“Another for this guy,” she says, shooting her thumb at me. Bartender knows me, knows I don’t drink often. Have to keep clear head in case of job. I nod that it’s okay. For now.

She half smiles. “Knowing your name puts me at an advantage, however small it may be. Why would I give that up?”

“I tell you what,” she says. “You listen to my proposition. You like it, and you agree to it, then I’ll tell you my name.”

“Cute, but no. I’ll tell you my proposal first, so you don’t run away. I’m putting together a little expedition, and I’d like a few extra guns backing me up. Normally I’d settle for any capable body with a decent flint, but you’ve got a couple of six guns on your hip. And I’ve heard your name five times since I arrived on this station, not half an hour ago, so I know you got a reputation.”

“What is Proposal, then?”

“It’s gone missing. Vanished into the heart of a hurricane that isn’t moving. And I want you to help me find it.”

Certainly sounded intriguing. Heard rumor station had gone dark. Troubling if true. Lots of lives on Waystation. Lots of business, too. Probably a sizable bounty for anyone who figured out what happened.

We shake hands, and deal is done. As was my understanding of the way the world worked up to that point.

2 thoughts on “Work in Progress: Klaus Klaudhopper and Arufina Villanova in…”