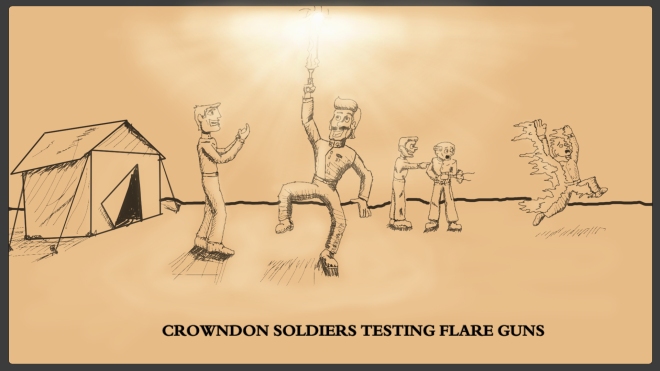 22/5-It seems as though the flare gun tech that allegedly caused out of control fires during performances of Delando’s fantasy epic ‘Fires of D’Kalm D’Korr’ has attracted the attention of the Crowndon military.

“I can think of a hundred uses for such a device,” said Ground Corps General Henry McTolliver in a conference last night. “They could be used to ignite containment vectors around enemy encampments from a safe distance, or to quickly liberate potential bivouac areas of enemy flora and fauna. They’re also proving to be entertaining at mandatory company fun days.”

Another officer at the conference suggested they could be used as signaling devices for soldiers stranded behind enemy lines, something the General quickly disregarded.

“No soldier of Crowndon would ever use these devices in such a manner,” the general explained. “If a soldier of Crowndon found himself in such a situation, it would be his duty to use the device to incinerate as many enemy combatants as possible. Let the ensuing inferno serve as a signal fire. Killing two birds with one stone…that’s Crowndonian initiative right there.”

Nor Eastern industrialist and philanthropist Sir Rigel Rinkenbach seemed exasperated by the general’s comments when asked for comment.

“I don’t even know where to begin,” Rinkenbach said. “I wish I could say I am surprised. Leave it to Crowndon to find a military application for something intended to further the arts. Do you remember the South Monteddorian Water Pump fiasco? Because I do, and the results were disastrous.”